This article explores the trope of ingestion in two literary representation of the 1781 Zong massacre, Fred D’Aguiar’s novel Feeding the Ghosts (1997) and M. NourbeSe Philip’s experimental poetry Zong! (2008). In drawing attention to acts of ingestion, I seek to expand scholarly discussion of these two texts which has to date somewhat stalled around framing them as confrontations of the traumatic past. Grounded in scholarship that, for instance, argues that ingestion forms “political subjects” by “fusing the social with the biological” (Tompkins 1), this article posits the act of ingestion as a navigation of socio-historical/-political forces. As represented by these two texts, ingestion functions in the context of systems of power wherein those in privileged positions can be consumers while the enslaved are figured as excreters with bodies in states of dissolution. As my discussion addresses, those benefiting from the slave trade are critiqued in these texts for their dystopic overconsumption and cannibalistic voraciousness, while those enslaved are portrayed in terms of the impossibility of achieving nourishment even when able to eat/drink. Although common theoretical assumptions would link ingestion with empowerment, what my exploration of these texts reveals is the insufficiency of such an assumption. Since to consume is also to confront one's dependence upon and vulnerability to outside matter, for the enslaved the act of ingestion can be an incorporation of, hence surrender to, one's enslavement.

Veronica Austen, St. Jerome's University at the University of Waterloo

Veronica Austen is an Associate Professor, specializing in Canadian and Postcolonial literatures, at St. Jerome’s University in Waterloo, Ontario, Canada. 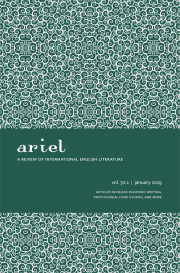