This study focuses upon the Academies Programme in England from 2002-2010. From one perspective the Academies Programme is a straightforward attempt to increase educational achievement. And yet, from its inception the Programme has been controversial, principally because of a private ownership ideology being introduced into state schools. The findings of this study suggest three areas of significance. Firstly, evidence suggests that Academies per se cannot be said to improve academic achievements in line with government expectations. Even where an increase has been shown, it usually refers to schools that were already performing well before becoming Academies. Secondly, alternative evidence shows that Academies do appear to be reaching government achievement targets. The problem here is that the data can be interpreted as flawed, because much of the research is government commissioned and it is in their interests to arrive at 'improvements'. The third strand is concerned with the time frame under investigation. Between 2002- 2007, schools which became Academies often had a diminishing Free School Meals (FSM) intake and an increasing number of excluded pupils whose performance was poor, thus affecting a school's overall grades. 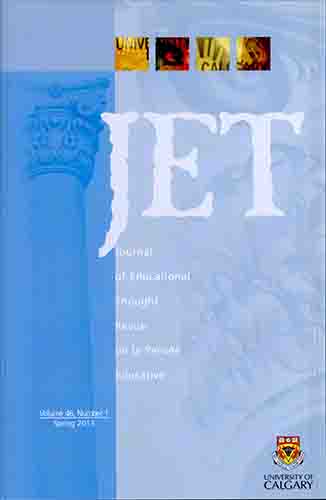 The Journal of Educational Thought retains first publication rights for all articles. The Journal grants reproduction rights for noncommercial educational purposes with the provision that full acknowledgement of the work’s source be noted on each copy. The Journal will redirect to the appropriate authors any inquiries for further commercial publication of individual articles. All authors wishing to publish in JET will be asked to fill in and sign a Consent to Publish and Transfer of Copyright agreement.

Authors must affirm that any submission to JET has not been and will not be published or submitted elsewhere while under considration by JET.